Sylvania was probably the most prolific American tube manufacturer, and their tubes were found packaged by many well-known USA name brands. Among the EIA codes that you will find on Sylvania-manufactured tubes are 312 and 722. Here are photographs to illustrate the wide diversity of companies that Sylvania manufactured for… 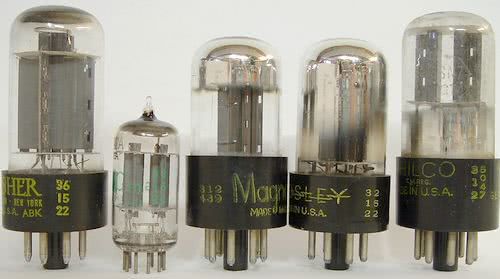 (Above: These tubes all have Sylvania 312 (EIA) code. In this example, the retail names are Fisher, Conn Organ, Magnavox, Crosley, Philco. Please note that these companies distributed tubes by other tube manufacturers also. ) 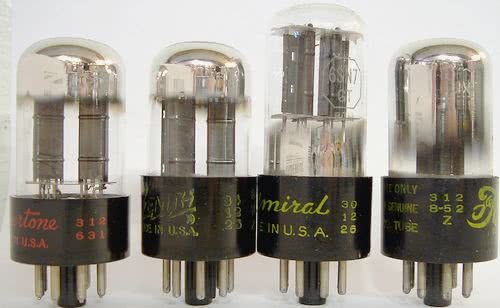 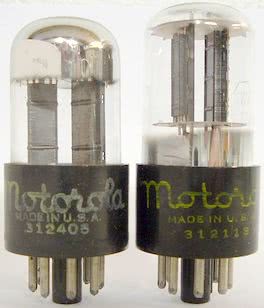 Likewise, any tube with a true CHROME-TOP design and Letter-Number-Letter designation is Sylvania manufactured, regardless of whether the 312 code exists or not. 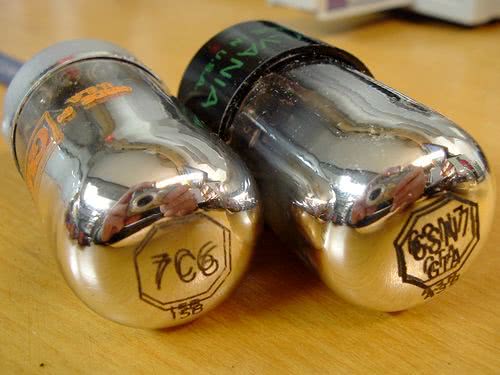 (Above: Both tubes demonstrate Sylvania`s CHROME TOP design. Notice that Sylvania Chrome-Top tubes will always have a code adjacent to the tube-type. The code consists of three characters, usually (but not always) in a Letter-Number-Letter sequence.

The tube on the left is DELCO-branded and does not have a 312 code, but is Chrome-Top with I5B code. The tube on the right is Sylvania, with Chrome Top design and A3B code.)

In the next example, you see another Sylvania chrome-top tube.

In this photo, the CBS Hytron 6SJ7GT tube still has the Sylvania “S” logo very much visible on the base! Apparently Sylvania had already silkscreened this tube with their own logo, but subsequently the inventory was purchased by CBS. It is obvious that CBS attempted to remove the Sylvania logo, but under careful light it is still visible. You can easily identify the tube as Sylvania-manufactured. It has Chrome-Top construction with a 3 character glass code, in this case “F1B”.

Another odd “find” was these Sylvania 6AQ5A tubes.  They were part of sleeve of 6AQ5A, virgin inventory found directly from a Sylvania distributor.  The tubes have factory matching glass codes, but one tube was Gray-Plate construction, while the other 4 tubes in the sleeve were all Black-Plate construction.  I have seen same-codes-different-plate situation before, but rare to find them supplied in the same sleeve.

Sylvania was also a prolific manufacturer of tubes for OEM musical instrument/equipment companies. For example, Allen Organ Co. used Sylvania-manufactured tubes and carry an EIA code of 722 (not to be confused with Milwaukee Resistor).

Even without the Sylvania logo or EIA codes, Sylvania used a 5-alphabetic code, consisting of 2 letters followed by three letters. 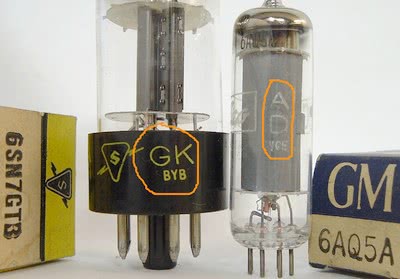 (Above: Sylvania manufactured tubes with 5 Letter code, consisting of two letters, then a series of three letters. In this example, Sylvania and GM Delco).

Here is an example of unique Sylvania-manufactured designation for 12AX7A tubes, where the tube is printed as “12AX7A ECC83 7025” vertically stacked. In this example, this tube is branded as an RCA, but was in fact manufactured by Sylvania. Compare to the Sylvania-labeled tube.

Here is an example where the OEM code was misleading.  The tube on the left in a GE-branded 6SN7GTB with 188 silkscreen code.  The real manufacture was Sylvania. This photo compares a well-known Sylvania 6SN7GTB black plates audio tube, 1960’s vintage, which has printed into the glass “6SN7” above “GTB” . The GE-branded tube on the left of the photo is without any doubt Sylvania-manufactured, even though the tube was silkscreened “188-5”. This is a situation where experience provides the real answer, and the 188 oem code was misleading.

When time permits, I will add more examples to article.