The CBS Hytron (EIA) code number is “210”. When you find a repackaged CBS Hytron tube, you will most commonly find 6SN7GT and 6SL7GT. Here is an example: 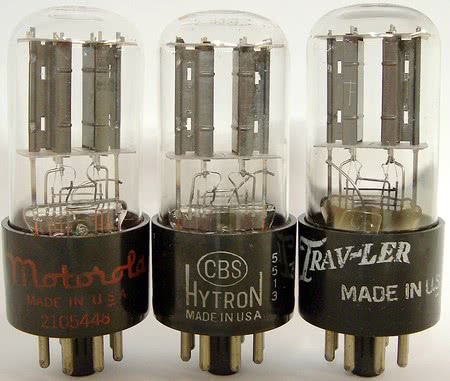 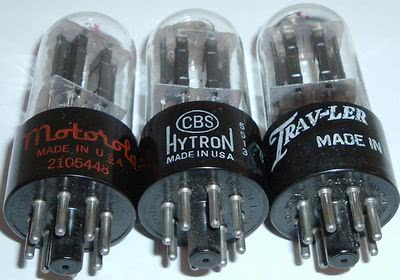 In this example, you see three 6SN7GT manufactured by CBS Hytron. They carry the retail names of Motorola, CBS Hytron, and Trav-ler.

The CBS Hytron construction is easy to identify: Clear Top design, Black Plates, the famous hole in the plastic key pin, getter shaped like a `square D`. Vintage is 1950s. Often you will find the 210 factory code, but not always. In the above example, the Motorola and Trav-ler have the 210 codes; the CBS-labelled tube (ironically) does not have the 210 code.

So, when is a CBS Hytron tube NOT manufactured by CBS?

Answer: when they resold another company’s production. 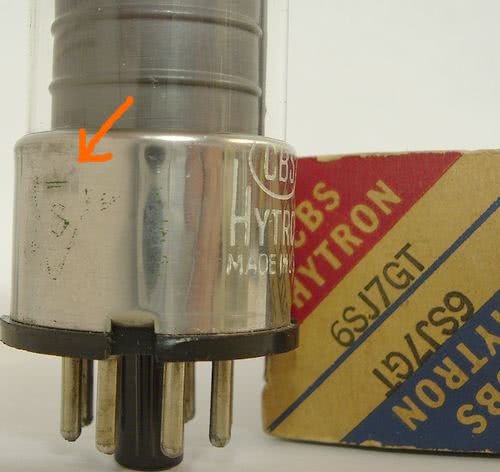 In this photo, you see a CBS Hytron 6SJ7GT tube which still has the Sylvania “S” logo very much visible on the base! Apparently Sylvania had already silkscreened this tube with their own logo, but subsequently the inventory was purchased by CBS. It is obvious that CBS attempted to remove the Sylvania logo, but under careful light it is still visible.

Even without the Sylvania logo visible, you can easily identify this tube as Sylvania-manufactured. It has Chrome-Top construction with a 3 character glass code (Letter-Number-Letter sequence), in this case “F1B”.